Handling completed orders within a tote or a shipping container can reduce the amount of manual handling required to fully process shipments. A reduction in manual handling also has the ability to reduce the total order cycle time from the point it is dropped through shipping on the outbound truck. The removal of human intervention also reduces the likelihood that a parcel or pallet can get placed on an incorrect trailer.

The Narrow Belt Sorter uses a set of narrow strip belts to carry product over the surface of the sorter.  The NBS contains an individual takeup for each belt in the system.  At the divert location on the 90 degree divert bucket a series of high friction rollers raise to engage the product and divert it off of the sorter at a right angle.   On the 30 degree version, fixed angle wheels rise up between the carrying strip belts and divert product off the sorter.

A pusher sorter as the name implies uses a device to “push” product off of the sortation line.  These pushers are usually constructed using an air actuated cylinder with a block mounted across its face.  The cylinder extends out until the desired length is detected (usually via a reed switch at a fixed point) and makes contact with the item traveling across its face, thus diverting it off of the main line.

Several pushers can be mounted along a belt conveyor to increase the number of sorter points.  An extremely economical sortation method when a minimal number of sort points are required these types of sortation devices were some of the very first sorters put into service in the 1950’s.

A paddle sorter or BAT sorter as the name implies uses a paddle to shunt product off of the sortation line in a similar fashion to a bat being swung by a hitter. The paddles are constructed with an air actuated cylinder with a flat face.  The cylinder extends in such a fashion that the furthest downstream side of the face extends out at an angle, allowing the item to be sorted to be guided along the angle established along the paddle’s face.  Also by coming into contact with the item being sorted the package is diverted.

A pop-up wheel sorter is a series of buckets installed along a belt conveyor where the belt is serpentined through the divert bucket.  This allows one drive to be used though where the belt surface is interrupted by the divert buckets.  The product continues to conveyor over the buckets via carrying bands.  As a product is tracked and it reaches the precise divert location, fixed position divert wheels popup and divert the product off of the pop-up wheel sorter.

The divert bucket itself consists of multiple rows of wheels that will popup in a fixed orientation. These buckets can be replaced in a matter of minutes in the event service is required. The modular design allows for one to be removed and a new one swapped in quickly.

The Narrow Belt Sorter uses a set of narrow strip belts to carry product over the surface of the sorter.  The magic of the wave is the cascading or “wave” of the individual rows of wheels.  5 rows of wheels cascade such that the first row drops followed by each row in direction of flow one after the next.  The result is that a reduced amount of gap is required on the machine.  This results in a higher overall throughput in terms of product feet vs. gap or air required on machines that have a higher gap requirement between cartons on the machine.

A sliding shoe sorter is a highly accurate option for sorting products of many different shapes, sizes, and weights.  Shoe sorters have the ability to sort products at a high rate without causing any damage to the product.  The rate at which it can sort will depend on the size and weight of the product itself.  The range for the rate may be from 20 products per minute to hundreds of products per minute.

In order for a shoe sorter to operate, slats are attached to the conveyor and used to carry the product through the system.  Shoes are attached to one side of the slats while diverts will be on the opposite side.  As products are carried along the conveyor path toward their specified divert, multiple shoes will gently divert the product in a diagonal direction from the slat conveyor onto the divert lane. The diagonal motion of multiple shoes is used to avoid damaging the product.

A Bombay Sorter also known as a flat sorter is used for high speed automated sortation of small lightweight items.  These items would be too small and light to be handled by a typical conveyor system and included bagged garments, Jewelry, pharmaceuticals, CDs, mail, books, and small parcels.  Bombay Sorters are typically found in distribution centers that do a lot of direct to consumer operations. The Bombay Sorter handles similar items and operates in the same way that a tilt tray or crossbelt sorter would.  Bombay Sorters typically have hundreds of sort location making these sorters rather long.  However, they do make good use of space with sort location as close to each other as 18” center to center.

These sorters can be engineered to have curves and designed to fit tight warehouse spaces. On all three of these sorters, the item being sorted can either have an operator manually place items on the sorter or have an automated induction system that handles getting the items on the sorter. Once the items are on the sorter they are then scanned and assigned a location to be sorted to.  Unlike the Tilt Tray Sorter and the Crossbelt Sorter the Bombay Sorter items fall through a trapdoor to arrive at its sorted location, hence the name.  The items can be sorted into a chute for further processing or dropped directly into a carton or tote ready to ship to its customer.

The Crossbelt or Loop Sorter is comprised of a chain of many short belt conveyors riding on a track that is on a continuous loop. Every single belt carries one item to be sorted.  When the item is ready to be discharged the belt will run across the flow of the loop and divert the item to either side of the system.  This configuration makes the Crossbelt Sorter a highly efficient mechanism, requiring minimal space for high volume item sortation.

Crossbelt sortation conveyors can be fed by automated induction stations, or by operators manually. Scanners match an item bar code to a belt section and track the item to the correct destination. These sorters often feed customizable chutes that allow a single divert location to create multiple orders. Crossbelt Sorters are superior to use after a wave pick or batch pick operation.

This particular sortation can be designed in 2 different configurations; Horizontal Sortation which is circular and Vertical Sortation which is in a linear format. These conveyors are the RightFit solution for operations that require a higher volume of throughput, a wide range of product shapes and sizes, or have narrow footprints and many different processing stations. This technology has been widely used in many industries including grocery, apparel, and e-commerce.

A Tilt Tray Sorter is a specific type of continuous loop sorter, which is a highly-accurate, high speed method of sortation. A continuous loop sorter is comprised of a rail or track configured in an endless loop on which individual carriages ride at speeds of up to 590 feet per minute. The carriages are connected together to form a chain, which is used to drive them along the track.  Specific to the Tilt Tray sorter, each carriage is topped by a tray, commonly made of wood or plastic, that can be individually actuated to tilt to either one or both sides. The item on the tray is then deposited by gravity onto either a chute or a takeaway conveyor.

Items to be sorted can be manually deposited onto the trays by personnel, automatically inducted onto the trays by induction conveyor, or a combination of the two methods. Regardless of which method is used, the item placed onto the tray is tracked by controls software and is transferred to its correct location. This arrangement allows for sortation of up to 40,000 items per hour.

Tilt tray sorters are very versatile in that they can be used with virtually any type of packaging. Whether the item to be transferred is packaged in a carton, bag, or tote, if the item fits on the tray, it can be sorted efficiently, including very small or oddly shaped items.

In comparison with other sortation technologies, a tilt tray sorter can be easily reconfigured or expanded with minimal difficulty. This technology has been widely and successfully used in many different industries, just a few of which are apparel, postal, publishing, and pharmaceutical.

If you work in order fulfillment then chances are that you’ve given some thought as to whether or not you ...
Read More

Sorting Out the “RightFit” Solution

Our sortation system capabilities are among the most advanced in the industry. From highly specialized vertical market segments in the distribution space to robotic palletizing systems, we have successfully designed and installed some of the highest rate Sortation systems in North America.

Conveyco has also designed and implemented custom solutions for clients, including sliding shoe, unit, and other high-speed sortation systems for over three decades. Learn more about our design build process, or request a complimentary consultation today. 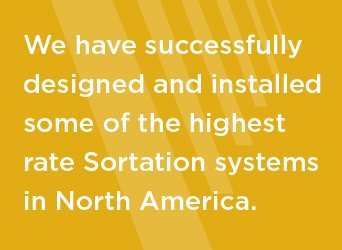 The Essential Guide to Choosing a Sortation System for Your DC