Is the Pick to Cart Method Dead in the Direct to Consumer Environment?

With countless operations (including Amazon) already using robotics and other automation technologies to get product where it needs to go, does the old model of order fulfillment—pick to cart—make sense?

What does pick to cart mean?

Picking to a cart was one of the first methods used to batch pick inside a warehouse. Batch picking means that an operator will pick to fulfill multiple orders at once.

In a batch pick to cart scenario, an operator will have multiple containers on a cart, push the cart to a forward pick location and pick multiples of a particular SKU for placement in multiple orders. Batch picking can greatly reduce the amount of walking an operator must do to complete a single order, increasing productivity and efficiency. 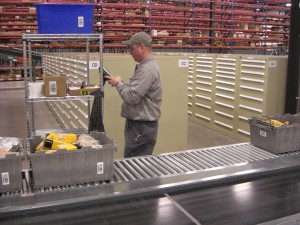 However, as SKU profiles increase it becomes increasingly difficult to organize an optimal pick route. Additionally, the orders are now left open to operator error as they could put the SKU in the wrong order. For larger distribution centers, the sheer volume of pieces to be picked created a lot of traffic.

How has pick to cart technology changed?

As technology improves, picking to cart has become a much better option in the right environment. Operators can now be directed along the most optimal order pick path by a voice picking operation and confirm pieces picked to improve on accuracy. Pick to light technology increased the speed in which greater accuracy could be reached. However, this has also introduced battery packs on carts, which brings its own complications.

So you may be asking yourself, “How does picking to cart stack up? Is it still a viable option?“

Fast forward to today’s direct to consumer environment. The answer is not nearly as easy as it used to be. With the relatively small number of lines per item (2.2) average picking to a cart may sound like it makes sense. Your pickers can satisfy multiple orders with a single path to minimize walking. However, your operation team needs to scrutinize the operation further.

How to determine if a pick to cart system makes sense for your Operation?

Is picking to cart an optimal way to pick?

Though picking to cart is a somewhat dated method of order fulfillment, the fact is, it remains a viable strategy for many operations.

That being said, only an in-depth analysis of the SKU velocity and order profiles can point you and your team on the right path. A qualified systems integrator can help you determine whether or not pick to cart—or some other strategy—makes the most sense for your operation.

This article was originally published on December 10, 2015 and has since been updated for accuracy and style.