Warehouse Execution Software (WES) has gained in popularity and sophistication in recent years due to its ability to create efficiencies, solve specific user business requirements and its cost effectiveness.

WES has progressed from concept to “must have” in a relatively fast time. To level set this article, most warehouses and distribution centers (DC) have had multiple layers of software. Enterprise (ERP) is the business logic and applications on top. The Warehouse Management Software (WMS) is layered below to primarily manage everything within the four walls. The bottom level was Warehouse Control Software (WCS). This level focused on optimizing the different zones or areas technologies. This hierarchy allowed facilities to manage the operations but created islands of automation. This also led to an inability to optimize the entire facility’s equipment and labor in real time.

The line between where WMS leaves off and WCS start has over time become blurred. The cost of development within a WMS being significantly greater than the cost to create similar functionality within WCS plus the requirement to manage multiple “islands” of automation has resulted in the WES being born. An optimized WCS with many of the features previously found in WMS systems designed to orchestrate the entire operation to perform as efficiently and effectively as possible. Knowing that NO order leaves the building until the last piece is picked and packed, the WES makes sure each area is operating to mitigate peaks and valley activities otherwise found during the course of a day, an hour, a zone or work area.

Many software companies will sell its first system and write the code. Then they sell another system, and they modify the first system to meet the second project’s needs. This continues job after job. You wind up with similar, but “totally different” systems that are very, very difficult to maintain.

If the original programmer is no longer available, support becomes increasingly difficult. Factor in variations, deviations, new drivers, updates, equipment that the original programmers never dreamed of and you can have an awful lot of code, often referred to as bloat or spaghetti code. These deficiencies will manifest in a lack of performance, crashes, memory leaks and overall complexity to maintain and update.

Leading WES providers today have an advantage of being able to create software from scratch using new tools and best practices. Building on a clean and concise code, highly configurable modules are created to meet every organization’s operational requirements. This creates a flexible and cost-effective solution for organizations.

Likewise, the code for every project is compiled from its original state… every time. This eliminates using variations from previous versions and their inherent (and hidden) problems.

Each module can be operated independently and communicates to the other modules. So, if you are adding or upgrading modules or total system functionality it does not impact the other modules. This reduces the WES system’s acquisition cost while allowing future functionality as the business case requires it. This methodology also reduces implementation time and maintenance requirements without sacrificing future needs. The configurability allows many minor changes that formerly were change orders to be configured by the user at no cost.

Emulation, or Running the System Before Installation

You will also find emulators built into leading WES software offerings. A software emulator interfaces in the exact same manner as the external devices which the WES communicates. For example: PLCs, scanners, robotic controllers, and host systems

What this allows software providers to do much is more extensive testing of the WES, pre-installation. In addition, the WES and its configured hardware can be tested at many times the rate required. This helps detect some long-term issues. Things like database creep, when the database is constantly growing, until it eventually chews up, all the disk space in the system and crashes or memory leaks. These and other issues don’t occur during the startup or warranty period, they occur months or years later and are devastating.

The easiest sign that your software system is not performing properly is the need to shut down and reboot over the weekend to gain performance and keep the system running properly. The use of clean code and emulators would have detected and eliminated these issues.

Besides performance, integrated emulators minimize installation time and on-site coding. Nothing is worse than having a cafeteria or conference room full of programmers making changes to your software while in your facility. Emulators help assure the system is properly configured prior to getting on site, expedites going live and assures meeting current and future growth requirements.

Best part of having the emulators is you can set it up on a test box, and make changes to your system, run it through the emulator, see what the impact is, before you go live. This helps organizations plan and test future scenarios before they occur.

To Pick by Wave, Waveless or Overlapping Waves

Historically the WMS sent waves (large batches of orders once or twice per shift). WES introduced the concept several years ago called waveless order picking. Waveless picking helps build more efficient orders and increase picking speeds because there are more orders to pick and optimize from. This was critical to meet several hour and same day shipping requirements.

Today’s WES offers a third concept, a hybrid called Overlapping Waves. Using overlapping waves utilizes waveless picking to begin with for maximum efficiency. But towards the end of the wave when it becomes less efficient, overlapping waves are automatically introduced to increase picking efficiencies and flatten out the peaks and valleys. 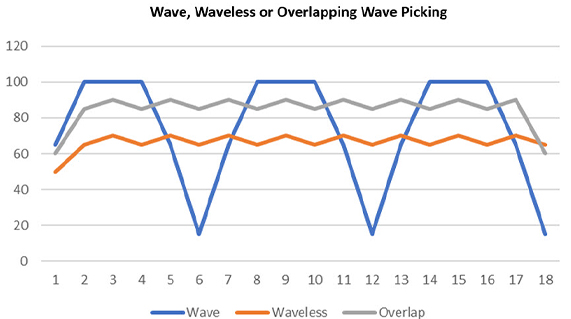 Looking at the chart, wave picking (blue) illustrates the periods of high productivity, but it also has valleys of low picking productivity as the wave is completed. The waveless picking (orange) evens out the peaks and valleys but provides a lower total throughput. Overlapping waves (grey) illustrates how this hybrid keeps productivity at the higher level of performance than just wave picking.

An example of how overlapping waves works and is so productive and efficient, is to say you have 30 lanes in your system. WES uses wave picking for the first way for 15 lanes, and then when the wave gets about halfway through will start kicking in the next wave to the next 15 lanes. Overlapping waves allow the first wave to reach its peak and as it begins to become less productive, the system introduces the second wave. This keeps the entire system at a high level of productivity longer and reduces labor and improves equipment utilization.

Each of the three wave processes work exceptionally well for specific businesses, applications, and order profiles. The key is to have all three available to you when selecting your WES software, so your labor and equipment are optimized.

The ability to use whichever and whatever type of hardware in your organization sounds like a commonsense decision when selecting WES software. Many leading providers of WES software are hardware agnostic, but not all. If they are partially or fully owned by a hardware company this can lock you into their hardware solutions for the life of your system.

Being hardware agnostic start with being able to run on various platforms ranging from Microsoft, Unix, Oracle, SAP, etc. This is easily achieved if the WES is written in java. Being able to select hardware vendors today and in the future due to changes in the market, pricing, reliability, scheduling, and functionality allows organizations to choose their own destiny as business requirements change.

Leading WES systems utilize rapid configuration tools to create your system. There are a number of different ways WES companies perform this, but systems that utilize a Visio type of drag and drop configurability and functionality work very well. By dragging and dropping different hardware system elements such as conveyor, diverts, PLCs, etc., to design your system, it intelligently guides you to the correct parameters. The emulators will act like the PLCs and communicate to you designed system to assure accuracy and performance levels.

This type of a WES will allow you to change parameters quickly and easily to set conditional and route directives, destinations, settings, scanners and barcode formats, etc. without requiring new coding or programming. These WES systems convert what was always a costly and time-consuming change order to a simple parameter change. Likewise, when the system design is complete and the emulated performance is above parameters, the system will create the system’s “clean code.”

Since WES is layered into an existing infrastructure, its vital that it can integrate to the host quickly and easily regardless of the system. This is done today by simply requesting the host’s output and having the ability to conform to this format. This eliminates host software programming costs and eliminates installation time, complexity and costs.

Another good feature for a WES to support is an open API for its UI. This allows organizations to incorporate screens that look like your existing system, custom design screens, and incorporating your own branding and logos on the UI is simple to do. Likewise having the WES UI being web based allows any mobile computing device that runs Google Chrome to run the WES UI and application is a must have. This translates to easier management, deployment, and usage. It also frees management from being tied to a PC terminal and free to roam the DC while still having the data at their fingertips.

Understanding how WES best practices has evolved over the last few years is often eye opening. Organizations are more than ever empowered to do as much or little as they would like to optimize their performance without the risk, cost and time historically associated with having your operations run the way you want them to.